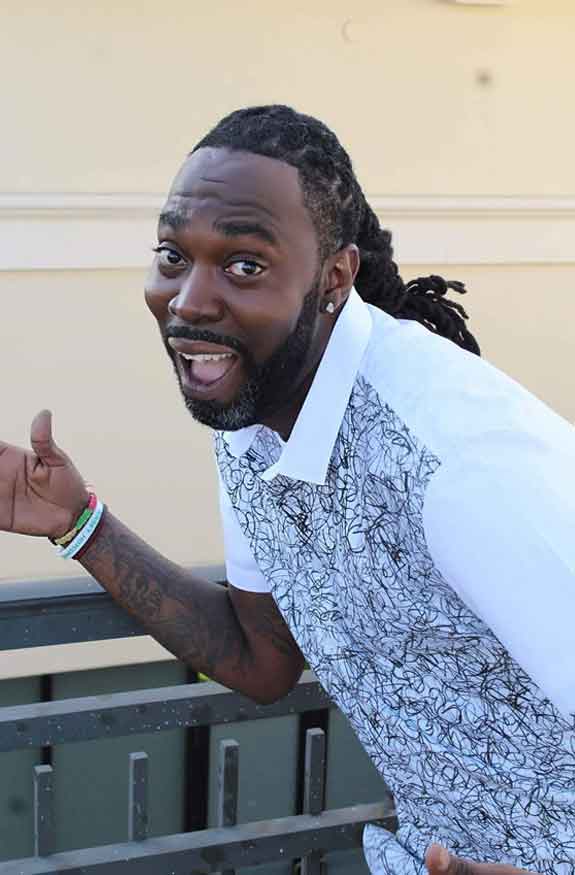 Jersey – The Haitian Sensation is also known as the “Hot Comic”. Above all, he is full of energy and is upbeat at all times.

Jersey – The Haitian Sensation, is an Orlando based comedian looking to set the world On FIRE. Notably, Jersey performs shows all over the country!
“For the right price, I will perform at your next Klan rally”, says Jersey smiling from ear to ear! Jersey’s punchy comedic style makes him one of the top comics in Orlando from the early 2000′s to today.

At a very young age, Jersey “Hot Comic” aka “The Haitian Sensation”, began telling jokes to his peers in his hometown of Irvington New Jersey. Thus, Jersey was given the nickname when he left New Jersey and moved to Florida. Not to mention, his impromptu/improvisational work makes him a fan favorite. To elaboarte, his material always varies from show to show. He performs in clubs/bars/lounges across the Southeast (Florida, Georgia and Alabama) and even makes many cameo appearances on TV shows and music videos.

In addition, Jersey has many influences. Some of them include Richard Pryor, Eddie Murphy, DL Hughley, and Bruce Bruce. Jersey speaks from the heart and breaches the gap between old generations and new generations. He is a different act with a bright future. He had the opportunity to tour with Jeff Dunham, and also featured for many great acts. They include Tracy Morgan, Robert Schimmel, Charlie Murphy, Mo’nique, Chris Tucker, Ralphie May and many, many more. Audiences across the southern regions of our nation simply all agree that Jersey the Hot Comic is the Haitian Sensation.

Jersey “Hot Comic” continues to hone his skills nightly as he performs his comedy at venues all across North, Central and South Florida. Jersey The Haitian Sensation’s material is known to be contagious, and will cause side splints, tears and stomach spasms! Check your local comedy listings for Jersey the Haitian Sensation. He performs at many events including but not limited to: Weddings, Club Nights, Corporate Gatherings, Birthdays, Charity Events, Music Events, Casinos, theaters and more!

Jersey, the Haitian Sensation, as seen on Comic View and Funny Not Famous, with special guest