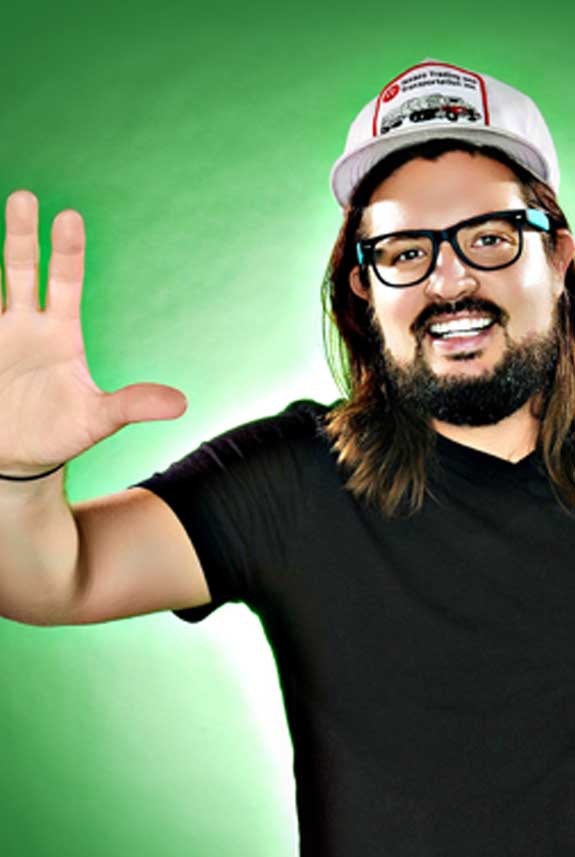 Dusty Slay is a stand-up comedian with a baritone voice so smooth, it’s like champagne in your ears.

Dusty walks you through a childhood in the trailer park, his adult years in the workforce, and as an occasional blackout drunk. He thinks skunks smell like weed, and leaves the serious topics like race, religion and politics up to someone who, unlike him, hasn’t drank gas out of a water hose.

Slay appeared on several network shows including ABC’s Jimmy Kimmel Live! NBC’s “Last Comic Standing”, the popular program “Laughs on FOX”, and was a featured comedian on “TMZ”.  In addition, Dusty’s comedy is regularly on many nationally syndicated radio programs. They include Sirius XM, Pandora Radio, and “The Bob and Tom Radio Show”.

Dusty was born in Alabama. His parents divorced when he was two, then there was a custody battle. His mom lost, so he had to go live with her. As a result, he split time between his dad who lived on a farm, and his mom who lived in a trailer park. When asked about his education, Slay says,

“When I was kid, my dad asked me if I wanted to go to college or if I wanted a pool. Man, I love that pool.”

Dusty Slay is now based in Nashville, TN. There, he is a local favorite at his home club, Zanies, and opens for many touring celebrities. They include: Rob Schneider, Jeff Ross and Roseanne. However, Dusty spends most of his time on the road, where he continues to make audiences laugh all over the country. He performs at comedy clubs such as: The Punchline and Laughing Skull in Atlanta, Crackers Comedy Club in Indianapolis, The Charlotte Comedy Zone, The Stardome (Birmingham, AL), Funny Bone Clubs (Syracuse, NY; Albany, NY; Virginia Beach, VA; Richmond, VA; Toledo, OH; Columbus, OH; Dayton, OH; Des Moines, IA), WI, The Improv (Tampa, FL; Kansas City, MO), as well as many other clubs.

Dusty released his debut comedy album “Makin’ That Fudge”, in 2014. The album is on CDBaby.com, Amazon.com and on iTunes.