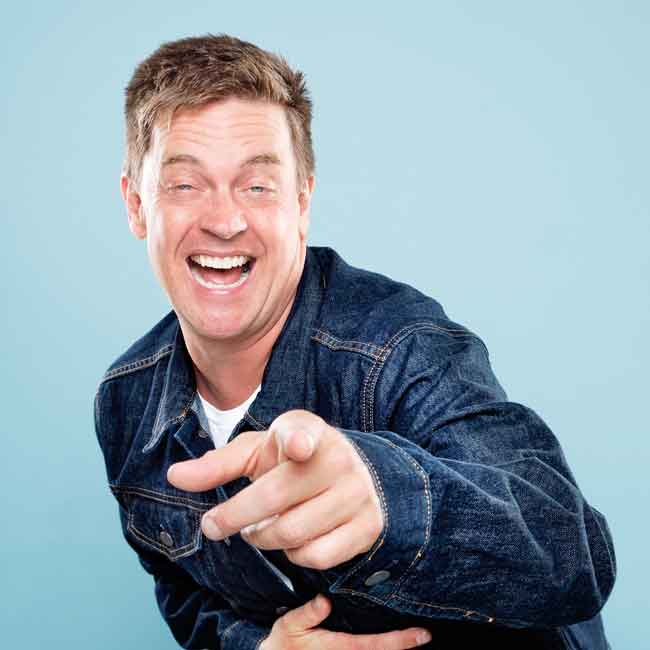 Not long after Jim Breuer did his first official standup gig, industry folks began asking him, “What’s your point of view?” “I don’t know…” He searched for a meaningful response to a ridiculous question. “To make people laugh?”

The freewheeling, New York-bred comic storyteller—who made the list of Comedy Central’s “100 Greatest Standups of All Time”—is hotter than ever; a global touring sensation and regular presence on radio and television whose rabid audience, he’s thrilled to note, is filled with “lifetimers.” Once folks see him live, they’re hooked.

Breuer came to national attention during his seasons on Saturday Night Live (1995-98).  Some even still associate him with Half Baked. The fans who got into Breuer in the new millennium were drawn in through his Comedy Central specials such as Hardcore and Let’s Clear The Air (one of the highest rated comedy specials in the network’s history). Many of Breuer’s newer fans know him from his guest appearances on Sirius XM’s The Howard Stern Show. Breuer was also the host of Fridays with Jim Breuer Sirius XM, originally known as “Breuer Unleashed.” He currently hosts a podcast called The Jim Breuer Podcast, which is available on iTunes and JimBreuer.com.

Breuer has been something of a multimedia sensation, currently appearing alongside Kevin James on CBS’ Kevin Can Wait as well as feature films Zookeeper, Dick, Titan A.E. andBeer League; hosting MTV’s popular Beach House and VH1’s Web Junk 20; and being featured on Comedy Jam, This Is Not Happening, Late Night with Conan O’Brien, The Daily Show with Jon Stewart, The Late Late Show with Craig Ferguson, Jimmy Kimmel Live, Late Night with Jimmy Fallon, and The Marriage Ref.

Tickets start at $55 per person.